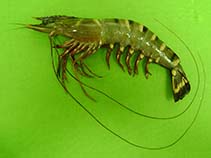 Other languages for Mako shark

The mako shark is at the top of the marine food chain, feeding on some of the world’s fastest tuna and billfish. Additionally, it is one of the best-tasting shark species of the hundreds found worldwide. Isurus oxyrinchus, or shortfin mako, and Isurus paucus, or longfin mako, are the two mako species. Oxyrinchus is the more frequent of the two species and the more economically important. Mako sharks are a great substitute for swordfish and are sometimes mislabeled as such. To tell the difference between mako and swordfish, feel the skin; mako has a sandpaper-like texture, while swordfish is smooth. Makos are fished globally in subtropical or temperate seas. The United States has fisheries off southern California, in the Gulf of Mexico near Florida, and up the Gulf Steam to New England. Makos are often caught as bycatch by longliners. The shark may reach a maximum weight of 1,500 pounds, although the typical market size is 125 pounds.

Mako shark has a full-bodied, meaty flavor that is juicy and somewhat sweet. The flavor and texture are comparable to swordfish, however the mako has a moister flesh and less sweet meat. Mako is incredibly soft and ivory-pink when raw, or a muddy, reddish tint when cooked. When cooked, it turns ivory white and firm. While the thin, thick flesh resembles swordfish, it lacks the whorls that make swordfish steak so appealing. Mako sharks, like other sharks, have urea in their bloodSteams. To prevent the urea in the tissues from converting to ammonia, they must be bled and frozen right away. Do not accept the fish if you detect ammonia.

Mako can be marinated, grilled, roasted, diced for soups and stews, or chunked for kebabs. Keeping the moisture in the meat by wrapping it or covering it as it cooks. Bloodlines may add a harsh flavor to red meat, so trim it away before cooking.